Prevalence of Hypertension in Philippines in the Year 2050: A Projection Study and Call-to-Action

3Department of Medicine, University of the Philippines, Quezon City, Philippines

13Department of Medicine, Division of Hypertension, University of the Philippines, Philippines

Aim: To project the prevalence of hypertension in Philippines using the national survey data in the year 2020 to 2050

Methods and results: Data from the 2018 National Nutrition Survey (NNS) and the Philippine Statistical Authority (PSA) were utilized for the projection study. A spline regression, which utilizes a non-linear regression technique, estimated the missing data sets in the hypertension prevalence by age and sex from 1993 to 2018. Deaths from ischemic heart disease, stroke, chronic kidney disease, and hypertensive heart disease taken from the Institute for Health Metrics and Evaluation were extrapolated from the hypertension prevalence. Hypertension prevalence remains high at 23%, with a 28% increase in the number of cases (24.28 million to 33.82 million) by 2050 given the population projection (101.60 million in 2015 to 142.10 million in 2050) and seriously affecting extremes of ages (early 20’s and 80’s). Deaths related to hypertension will increase more than double from ~90,000 in 2015 to ~210,000 due to ischemic heart disease, stroke, and chronic kidney disease.

Conclusion: A significant increase in the burden of disease due to hypertension is foreseen in the next three decades. This call-to-action to legislate policies for systemic programs is urgent to decrease hypertension prevalence, thereby reducing morbidity and mortality.

In the past four decades, the World Health Organization (WHO) reported a doubling in the number of affected individuals with Hypertension (HPN) or elevated Blood Pressure (BP) from 594 million to 1.13 billion, majority of which are living in low and middle-income countries. With the increase in the aging population, prolonged life expectancy, and continued rise in the prevalence of hypertension, the burden of disease will significantly happen in the Asian region. Globally, 51% of stroke and 45% of ischemic heart disease are attributable to uncontrolled blood pressure. Majority of reports identified the determinants hypertension to male gender, obesity, smoking, unawareness of diabetes and hypercholesterolemia, low income, low educational attainment, and urban dwelling.

For the past three decades, the hypertension prevalence in Philippines by the National Nutrition Survey done every five years showed results at 21% to 25%. However, with the country’s rapid increase in the population, the number of affected individuals with uncontrolled blood pressure continued to rise. A parallel increase in deaths and disability due to cardiovascular complications has been observed with ischemic heart disease, heart failure, and stroke being the highest contributors to the burden of disease.

The need to generate annual data to cover health and nutritional indicators for monitoring national programs led to the formulation of the Expanded National Nutrition Survey (ENNS) by the Food and Nutrition Research Institute (FNRI) of the Philippines. In the recent reports, the prevalence of hypertension showed a downward trend of 23.9%, 19.2%, and 17.5% in 2015, 2018, and 2019, respectively. Notably, similar results have been shown in Singapore, Korea and Japan. Initiatives and collaboration from both the governmental and non-governmental sectors have been reported to be contributory to the decline of prevalence of hypertension.

Hence, this study aims to project the prevalence of hypertension in Philippines from the year 2015 to 2050.

Data interpolation to get missing data of hypertension prevalence by age and sex;

Spline regression to estimate the hypertension prevalence by age (yearly) and sex;

interpolation to estimate the hypertension prevalence by age and sex by year (1993-2018);

Project number of hypertension cases from 2020 to 2050 using the estimated coefficient; and,

The death rates attributed to hypertension (HDR) was calculated using the equation below:

The share of deaths caused by hypertension, such as ischemic heart disease, stroke, chronic kidney disease, and hypertensive heart disease, were obtained from the Institute for health metrics and evaluation.

The National Nutrition Survey (NNS) by the Philippine Food and Nutrition Research Institute (FNRI) focuses on the anthropometric nutritional survey from children to adults 20 years and older. The survey employed a stratified multi-stage sampling design, covering all regions and 79 provinces of the Philippines from every 5 years from 1993 to 2008 then every 2-3 years from 2008 to 2015. In 2018, the design was changed to annual survey called Expanded National Nutrition Survey (ENNS) to address the need for local planning of specific and sensitive interventions. The design includes 37 to 40 provinces per year from 2018 to 2020, the grouping of which has replicates of rural and highly urbanized cities.

Projection of hypertension prevalence by 2050 As the population ages and grows, the number of Filipinos with hypertension among the adult population will signi icantly increase from 2015 to 2050 with an overall ratio of 1.39 (Table 1). With the ageing population, the projected prevalence in the next three decades will have a dramatic increase in the number of hypertensive elderly individuals by almost two-folds among the 60’s, by almost three-folds among the 70’s, and by more than ive-times among the 80’s (Table 2). The young ones in their 20’s will also be affected with the hypertension prevalence presenting earlier among younger segment in males.

Table 1: Prevalence rate of elevated blood pressure and number of Filipino adults with hypertension in 2015 (actual) and in 2050 (projected using historical trend of 1993 to 2015). Figure 2: Projected number of deaths from various causes due to uncontrolled hypertension among adult Filipinos in 2015 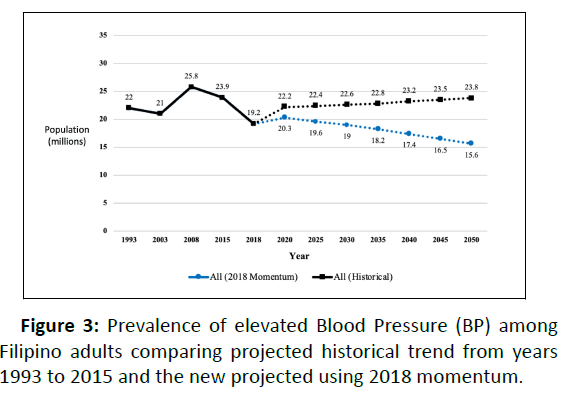 This will result to an estimated reduction of 72,587 deaths (Table 4).

In the last two decades, the prevalence of hypertension in the Asian region seem to vary with an estimate of 20% to 40%, with higher prevalence among urban dwellers regardless of socioeconomic status, conspicuously influenced by behavioral and metabolic factors such smoking, alcohol use, obesity, and history of diabetes and hypercholesterolemia. Low to middleincome countries are struggling in addressing significant morbidity and mortality due to uncontrolled blood pressure. Regardless of economic status, remarkable contributing factors to the burden of disease were identified to low awareness of hypertension to below 40%, low percentage of population on treatment, and inadequate control of blood pressure at mere 50% and below.

In Philippines, with the country’s increasing population the Filipinos with hypertension in the last two decades continued to increase from 8 million to 13 million, and it will inflate to 33.82 million by 2050. A dramatic two to six-fold increase will occur among the elderly population, aged 65 to over 80 years, at 2% to 6.80%. This finding is congruent with other Asian countries owing to the ageing population and longevity of life foremost from India China and Japan. With a common finding of male preponderance our study projects an increase in the number of hypertensive individuals from 2015 to 2050 of 13.94 million to 17.81 million among males and 10.34 million to 16.01 million among females. This proportion of gender difference could be attributed to behavioral factors like smoking and alcoholic drinking which are more common among Filipino males.

Another remarkable finding in our projection study is the early development of hypertension among the younger segment of the population. As early as 20 years of age, the male gender will be affected earlier than female at 12.40% to 32.70% (20 to 49 years old) in 2015 with an average annual increase of 1.32% in 2050. Although young females will not have the same pattern, more will be affected as they age with a prevalence of 39.20% to 59.10% at age 60 to 80 years and over. Overweight, obesity, and physical inactivity are metabolic and behavioral risk factors becoming more prominent among young females, who have been reported to become more obese as they age.

The other countries which showed a downward trend of hypertension prevalence were Korea and Japan. The decrease in prevalence of hypertension among Filipinos, using the 2018 momentum, will be more among females (31.38%) than among males (17.00%) in 2050. Moreover, greater decline in prevalence rates was noted in extreme age groups (20’s to 30’s and 60’s to 80’s) among both genders.

The downward trend in the prevalence of hypertension has been attributed to robust programs and collaboration from both the governmental and non-governmental units of the respective country. In Philippines, specifically the 2012 Sin Tax Law which excised tax system on alcohol and tobacco was passed primarily to finance Universal Health Care program with a secondary objective of addressing public health issues related to alcohol and tobacco use. Six years after its implementation, Austria and Pagaduan reported a significant reduction of annual cigarette consumption of households in all income bracket. This finding was supported by the 2018 and 2019 ENNS reports showing a decline in the proportion of smokers and alcohol drinkers in both genders, all age levels, and in rural and urban dwellers regardless of socioeconomic status. Another effective health program is the 2012 Philippine Health insurance corporation (PhilHealth) primary care benefit package. Filipinos were able to avail of free out-patient screening for risk factors (diabetes, cholesterol, etc.) for hypertension in health units, which eventually expanded to out-patient availment of medications for hypertension. This program was enhanced by the Department of Health adaptation of the WHO Package of Essential (PEN) intervention program for non-communicable diseases to all its health units.

For the past 26 years, the Philippine Society of Hypertension (PSH), in collaboration with other related medical and nonmedical organizations locally and internationally, has been active in its mission to address the hypertension problem from diagnosis, management, and research. For over 10 years, its partnership with the Department of Health has been successful to increase awareness through the 2009 Presidential Decree that made the month of May the “National Hypertension Awareness Month” through its established chapters all over the country. The month-long activities also highlight the World Hypertension Day (WHD) celebration of the World Health League of the International Society of Hypertension (ISH). The biggest achievement so far of PSH is the educational initiative of the society. Running on its 17th year, the Clinical Course in Hypertension Management Program has empowered over three thousand physicians and paramedical practitioners on the basic and clinical knowledge of hypertension and over 500 physicians have been certified as hypertension specialists, now serving in the far-flung areas of the country. Through all these years, PSH sustained its collaboration with all other sectors like educators, media, lay and patients, and legislators.

Lastly, the sustenance of effective programs is, indeed, vital to achieve the targeted goal of reducing the prevalence of hypertension. All initiatives are geared towards halting the continuous increase in the morbidity and mortality due to cardiovascular adverse outcomes (ischemic heart disease, heart failure, stroke, chronic kidney disease), of which hypertension is a leading cause. It was an eye-opener in our 2050 projection study that close to one hundred thousand deaths will be prevented, and probably even more if the prevalence of hypertension will continuously decline.

From this study, all health and health-related agencies (e.g., Department of Health, health educators, researchers, media, medical and paramedical organizations, pharmaceuticals, etc.) must be vigilant of various call-to-action initiatives. These programs and priorities include placing hypertension as a national priority, strengthening and continuing hypertension awareness, bolstering educational and research programs on hypertension, and monitoring hypertension initiatives for impact and outcome. In addition, additional legislations on hypertension-related risk factors must be implemented such as those geared towards salt intake, high caloric and fat-content foods, diabetes mellitus and obesity.

Albeit the presented projection, this study has certain limitations. First, the data acquired in the study had several missing data and were only imputed using appropriate statistical approaches. Second, the utilized datasets had different frequency of census (e.g., the FNRI initially started at 5 years and became 1 year afterwards) and used different sampling techniques, potentially introducing errors in the statistical approach. Despite these weaknesses, some of the strengths of this study include the robust statistical methods utilized to project the prevalence of hypertension and the use of multiple datasets and sources for the estimation of hypertension.

The authors declare no conflict of interest related to the paper’s subject matter. 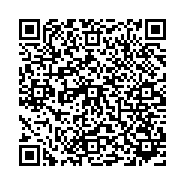